For the past few weeks, I have been working on creating a virtualized environment that would allow me to test different configurations and topologies with Virtualized Network Functions. In this case, virtual routers. One of the challenges when working with this type of workloads in virtualized environments is to emulate the connections of the different ports in a switch/router to the rest of the infrastructure.

Libvirt provides different types of networking that are well-known:

The first two types of libvirt networks involved the usage of linux bridge and Iptables in order to get access to the external world from the VMs. You can avoid these linux bridges attaching one of the physical interfaces of the host, directly to the virtual machine, however, we would need a lot of interfaces (physical NICs, macvlans, etc) to simulate the different ports in a virtualized switch. Furthermore, the traffic would be probably redirected outside our hosts, so this is a solution not very convenient.

Libvirt provides many other types of interfaces. You can get further information in the following link:

The interesting part of this link is the following text:

UDP unicast tunnels give us the possibility to emulate point to point connections among different virtual machines running on the same host, which turns out to be a very smart solution to interconnect virtualized switches/routers with servers in any desired topology.

Let’s take a look at a great Ansible playbook from Peter Sprygada that I’ve modified a little bit.

You will need some requirements to run this playbook on your host, but with the following packages should be fine:

In this case, the target machine will be just localhost, so we will run everything locally:

In order to run the playbook, it’s just as easy as:

The goal of this playbook is to create the following topology: 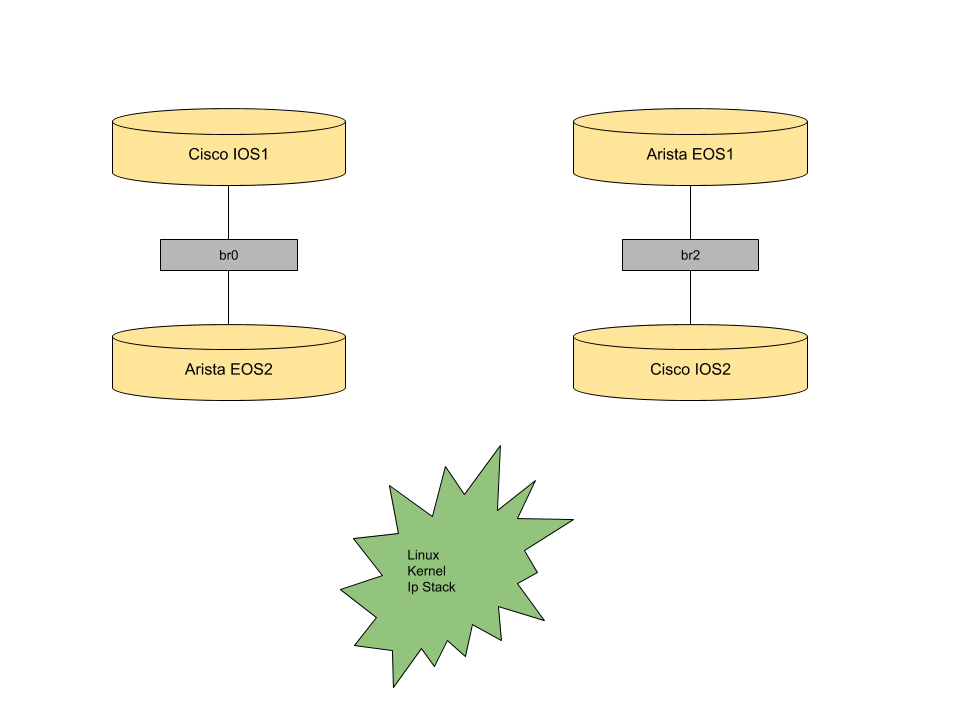 which consists on four different virtual machines connected to two linux bridges that will give us SSH connectivity from the host. You can modify the playbook to deploy whatever VNF you want, but as of now, this playbook would deploy two Cisco IOS and two Arista vEOS routers. For obvious reasons, the images for these VNFs are not uploaded since licenses are needed. But that’s not important here, we could be using simple Linux boxes like Fedora or Centos with OpenVswitch on it, and emulate the same behaviour.

Let’s take a look at the definition of one of the boxes located in the folder nodes.

You can guess some of the parameters used to deploy the VM, but check out the connections section. We are defining a set of interfaces of type: udp, with some source port and destination port. You can choose whatever port you want here. Now you would be asking, hey! so how do I do the point to point connection?

No big deal, it’s just a matter of swapping the s_port and d_port in a second box. So if we define ios2 with the following connections:

You can define as many ports as you want in those node definition files. Let’s take a look at how the XML definition of the virtual machine looks like:

The XML shows three types of interfaces for the same VM:

It has been a lot of fun playing with this, and it gives a lot of flexibility to create different and complex topologies. And of course, what better tool to automate its deployment than Ansible?

If you have any question about the playbook, or any other subject, contact me via twitter, email, etc